Stubborn, Stupid, and Crazy me

On Saturday I got up with a plan: I wanted to climb a mountain here in the Malaga area that I had read about on the internet. 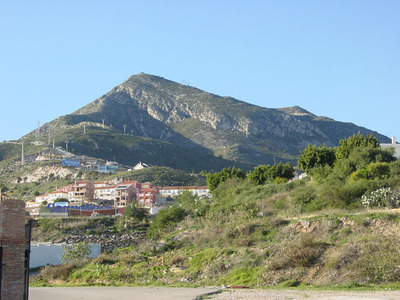 MOST people, to get to the top, ride a Teleferry. 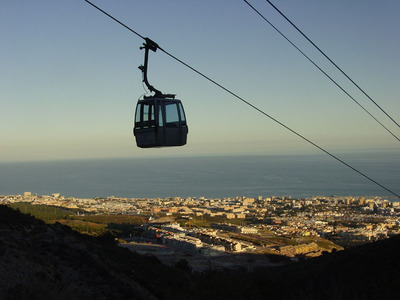 Slight hitch: The teleferry is closed from Jan 1-Feb 15. But no worries!

If I couldn't go up the teleferry, I could go up the trail. I have two good sturdy legs that could carry me. Sure, it would take more than the 15 minutes for the teleferry ride, but hey...it was going to be worth the effort!

Slight hitch: I didn't know exactly where it was, and I couldn't get anyone to go with me. But no worries!

After getting onto the wrong bus, changing to a train, and finally getting to the right town, I got off, full of anticipation.

After asking a lot of people and walking a long, long way, I finally made it to the trail. I started ascending, enjoying myself immensely. 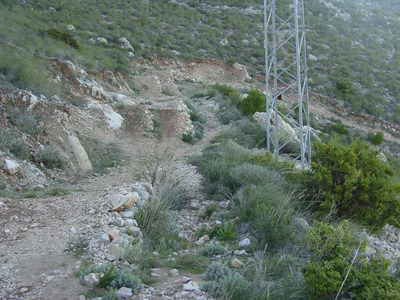 Slight hitch: I got onto what looked like a trail and wasn't. Before I knew it, I found myself in the middle of nowhere. But no worries!

Where I lost the trail: 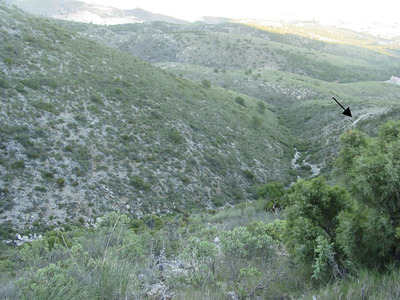 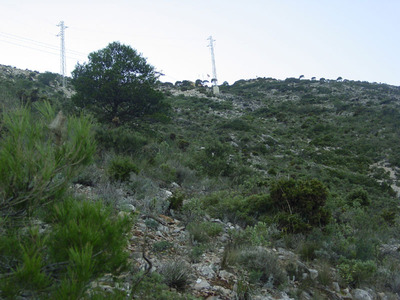 I was picking my way through unforgivably prickly bushes, climbing straight up what must have been the steepest side of the mountain. "But I think I can make it up this way," I thought to myself. So, breathing heavily, with my heart beating in my ears, resting every 3 steps, I started making it up that way.

Slight hitch: There were cactuses and thistles everywhere. But no worries! 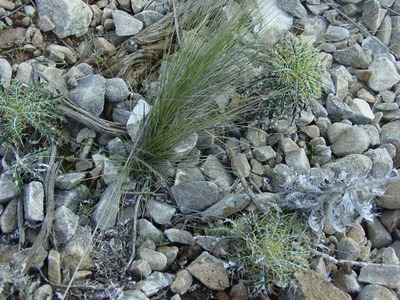 I just wouldn't use my hands to help me climb. So there.

Slight hitch: There were unsettlingly large animal tracks about, and unexplained rustlings of the bushes in various parts. But no worries! 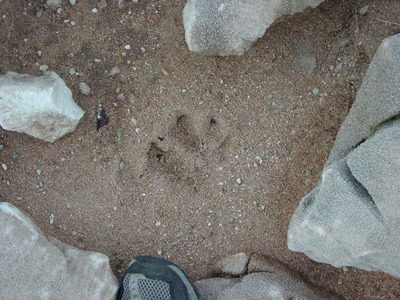 I kept seeing what I thought would be a path just a little above me, but when I would get there, I would find out that it wasn't. I finally made it to a patch of stones. I had seen it from below before losing the trail, and it was because of this that I thought there would be a trail farther up. 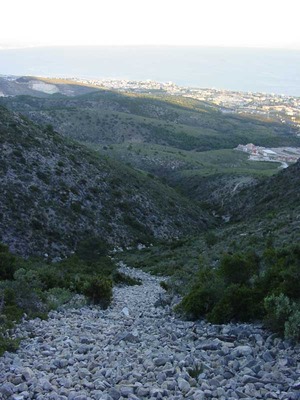 I started climbing up the stones, grateful to be free from the bushes.

Slight hitch: The stones were small and loose, and for every step I advanced, I slid back half a step. But no worries!

The stones ended, the bushes surrounded me again, and huffing and puffing and with great effort, I made it to the top.

Slight hitch: A man dressed in black with his arms crossed was standing in the middle of the path to the top. But no worries!

He was a security guard. He launched into a lecture in Spanish on how I shouldn't have come up that way, looked at me, saw that I was a foreigner, and started trying to speak German with me. I replied in Spanish that I spoke Spanish or English. "Oh, you speak a little Spanish?" he said (in Spanish). Then he began to talk to me in very simplified Spanish, roughly translated thus: "Do you know the word DOG? Woof woof, bow wow, Grrrr," he said. "Yes," I replied. He continued, "Four (One-two-three-four) DOGS. Big. Grrrr. Dogs catch you. Head--off. Face--off. Arm--off. You--hurt. Me--can do nothing." I smiled and apologized as profusely as I could in my best Spanish for having come up that way, and explained that I had lost my way and gotten onto something that I thought was a trail but wasn't. "You--I think--Crazy," he said, shaking his head. "Well... is it closed?" I asked. "Can I at least go up to the outlook spot and look around?" "All right. I guess you can go up and take a look," he replied, in normal Spanish this time. "But don't be long."

No one else was up there, and I went up for a look. The view was SPECTACULAR! The day was so clear, I could see the coast of Africa across the Mediterranean, Gibraltar, and the Sierra Nevada mountains in the other direction. 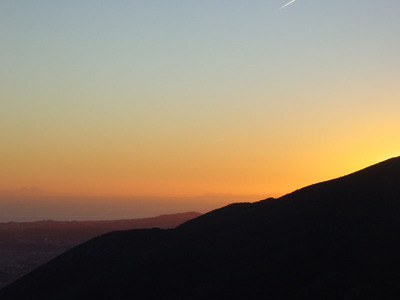 Slight hitch: The sun was already setting. But no worries! 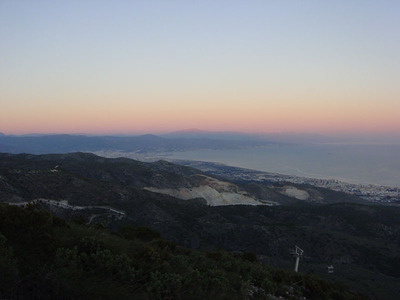 I went back and asked the security guard how to get down on the correct trail. He pointed to a narrow, winding road that started off in the opposite direction and wound around a long, long way. "That way," he said. "It's very long. I have no idea how many kilometers. You would have to walk a long way. It would be better to use a car." (You can see a bit of this road in the above picture at the left.)

Slight hitch: I didn't have a car. But no worries!

However, there was a wide tire-track dirt path that led straight towards where I wanted to go. "And how about this way?" I asked. "Well, you can go that way, too," he said. "But it's more dangerous." "Dangerous in what way? Danger of falling? Danger of thieves? Danger of animals?" I inquired. "Yeah, danger of animals and of stepping wrong and twisting your ankle," he replied. "Well, I'm not afraid of those things," I said. I thanked him and headed off on the more direct route, already slightly concerned about losing my daylight and preferring to get down quickly and go home as soon as possible on the train.

As soon as I was out of his sight, I started going as quickly as I could, running at times, speedwalking at others, thinking, "Hey, it's downhill from here!" However, at every switchback, the trail got narrower. I was a little concerned at this, but kept going. The trail kept getting narrower. Once I thought it had disappeared completely, but I backtracked and found it again.

Then I got to a place where I could not go any farther. The trail, which had been just a faint dirt track, finally dwindled away completely and I was left standing on the top of a cliff with no way to get down. Perhaps I could have made a rock-climbing expedition out of it if there had been enough light, but there wasn't. So that's what he meant by twisting my ankle.

Where I found myself (approximately) 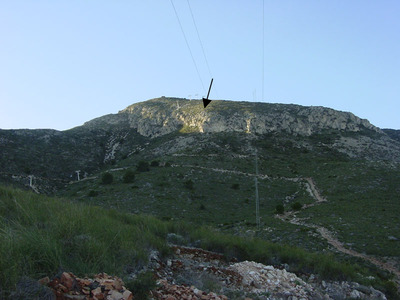 I was left with no other option but to climb all the way back up to the top (which was quite a ways) and descend by the long road the security guard had showed me.

It was already getting dark by that time. 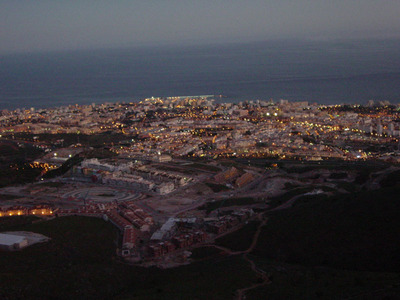 By the time I got back to the top, it was darker. 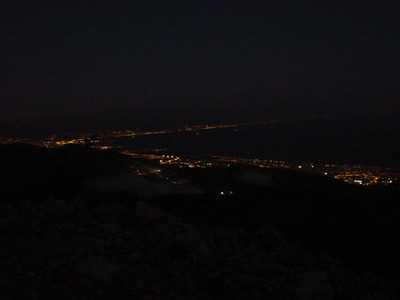 I snuck past the security guard without him seeing me (he was in the building with the radio on loud), snuck past his dog without it barking, and started down the long road, accompanied by a thin sliver of a crescent moon. Three cars passed me. I made it safely back to the train station and got home about 10pm, tired, thirsty, and satisfied. HAPPY ENDING!!! Yay!!!
Posted by securehope at 6:00 PM No comments: Links to this post